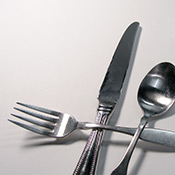 Butter Knife has not received any gifts yet

Give Butter Knife a Gift

I work well under pressure, so I'm a butter knife...

The butter knife has many useful qualities. At first glance, it's long, lean and functional. But take a closer look and you'll… Continue

You need to be a member of fork knife or spoon? to add comments!